Peggy Garrison an amazing poet and short story writer, when asked about censorship and finding your inner voice, responded with a quote from one of her students:

“There’s a witch near my ear riding shotgun-
trying to pick off my sentences before they can crawl to the page.”

Her eyes almost rolled back as she spoke the words, the lines in her face and the determination in her voice kept us from laughing. She had made this her mantra many years ago when an unsung student surprised her with it and we made it ours just because she told us to.
Posted by Raúl Stolk at 11:39 PM No comments:

Chariot of the Sun 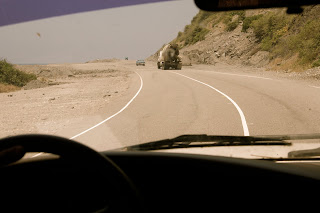 The asphalt is hot and crackled. Must be at least 100 years old. The road is infinite and it bears the stains and scars of abandonment. It separates the mountain from the sea and runs from east to west like a bleeding equatorial line. The mountain is huge, overwhelming even. As it meets the ocean, a fight between the white foam and massive rocks is revealed. The fight turns into a fading dance.

The sound of the rolling surf crashing with the mountain provides the perfect soundtrack. On the stereo a Bob Dylan cassette has been playing for uncountable hours now, from side A to side B, tirelessly.

A diagonal tear runs across the dashboard with several duck tape reparations along its way. Below the stereo an ashtray full of cigarette butts of different brands is barely holding on.

In the back seat lies my only companion, an old Gibson Lespaul. Though it has not been plugged since a lifetime ago, all I need is the tinkling sound of its lifeless strings as I pick on them with the tip of my fingers. I feel her staring right into the back of my neck, judging me. Wondering why no current runs anymore through her steel strings. Along with the guitar an old Adidas bag containing a bunch of dirty old rags one could call clothes. Under, the remains of a previous life that no longer is.

The cabin is dirty and has a funny smell, the smell of thousands air fresheners blended with heavy smoking. New car smell one could say.

The truck is old, strong, reliable and familiar. The color is white, or anyway it used to be. It has seen so many sunsets that it has caught a yellowish tone. It has no brand anymore for it holds parts from countless old machines. No branding, just like a wild horse. It is one of a kind.

It remembers me of the old man. Although the truck was so ridiculously looking it made him proud. Papa put it together all by himself. It was his most cherished possession. His own mechanical modern Prometheus. I remember the look on his face whenever he turned the keys and after a short screeching sound the engine would start. As if no one expected that it was going to happen and he surprised us once again.

When I was boy I used to admire the old truck, I daydreamed of driving it. Well into my twenties I despised it. Never understood why my father kept it around for so many years, and yet, here it was, taking me to what would be the most significant journey in my insignificant existence.

The seats are a cheap imitation of leather to which I have become fairly accustomed. On the copilot’s seat lies an old road map full of annotations, directions and phone numbers that will be dialed no more. Along with the map, empty paper bags where different sorts of greasy and unhealthy food used to be wrapped and empty beer bottles provide proper decorations.

I plunge my foot into the gas and feel the engine roar softly into cruise speed. Suddenly the asphalt road ends. A small ledge gives way to a dirt road. As the car swooshes from one road to the other, I feel as if the truck were floating. The dirt is way softer than the asphalt. Without looking in the rear view mirror, I know that a huge cloud of dirt is following me. I imagine how it would look from above. Through the salt covered windshield I notice how perfect an angle the mountain and the sea form. I feel the tempest I’m leaving behind. Dark gray clouds, heavy rain and lightning, contrast with the blue skies that lie ahead.

An old single fin surfboard is strapped to the roof, its color matches the truck’s and yet its significance is completely different. This was the first thing that was ever truly mine.

It is as if I were playing one of those cheesy games in which you have to pick four things to take to the end of the world.

The truck, other than knowing were I’m going to, is the most reliable piece of machinery in earth, “simple mechanics will never let you down,” the old man would say.

The guitar is company. Someone once told me you are never alone if you choose the company of a musical instrument. Plus, she never talks back unless I want her to.

The surfboard above my head is my own personal church.

And the tape (Dylan). The tape reminds me of her.

As the sun starts setting on the uneven horizon, color starts blasting all over the sky tainting it in different tones of red, yellow and green. I am blinded. The cabin is filled with the weary light of the late afternoon, and the sun while hurting my eyes, gently warms my face. Beams of color are shot directly into the storm in my back, morphing all those different shades of gray into an immense surrealist painting.

I feel like Apollo riding my burning chariot into the sun.

As I steadily hold my course, Mr. Dylan once again says, “it’s all over now Baby Blue” and I smile, for I don’t know what lies ahead.

Never thought that going back would feel like moving forward.
Posted by Raúl Stolk at 11:37 PM 1 comment:

Raúl Stolk
Nixon Vega is a character I wrote. He is not necessarily an Alter Ego but the voice I found to escape the witch that self-conciousness is.